How To Increase Throwing Power? 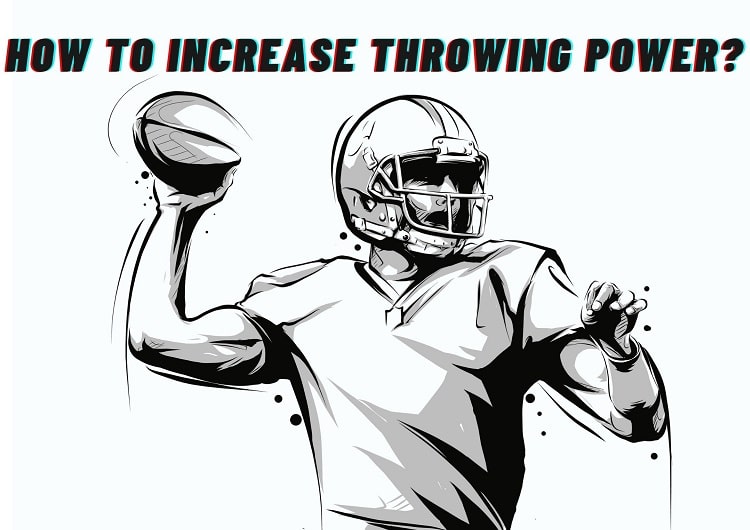 For a quarterback in football, it’s essential to know how to increase throwing power If you've struggled with generating enough power in your throw, this article is for you. I love studying the specific movements of footballers when they throw a ball. How are they able to generate power and how do body mechanics work behind a powerful throw?

The simple answer would be to work on two crucial aspects to increase throwing power, the first one is external rotation of the arm, and the second is the ability to create a hip and shoulder disassociation and trunk rotation. I see a lot of quarterbacks not being able to generate power in their throw. This is because they just get the ball back behind their head and don’t get much external rotation in the arm.

Let’s have a look at how you can increase your throwing power as a football player to give you an edge over your competitors in the game.

Now that we know what to avoid, let’s have a look at the basics to generate power in your throw.

When you are coming through with your throw, you should keep the ball as straight as possible in the motion. You can only do this if you maintain a straight elbow position. If your ball goes back and changes motion, you will not be able to generate enough power in your throw.

When your elbow is straight, it allows you to perform a bigger stretch with your pec near the shoulder. Moreover, you can create more power in your throw.

Most people miss out on this crucial aspect when throwing a football. You need to flick your wrist when you are coming through to generate that extra bit of force in your throw. If you fail to do so, you will not be able to play at that high level.

These are the nuances that you can work on, even though these changes are seemingly small, but if you work on these, you’ll see a massive improvement in your game.

Leading The Movement With Your Hips

When people are going forward for a throw, they tend to shift their entire body weight forward. A more effective approach is to make your hips go first keeping the rest of your upper body back. This allows you to load the throw powerfully.

When you are loading your throw, ensure your hips are rotating and opening up at the front while keeping your front shoulder closed. Many people when they rotate their trunk, also move their upper body with the motion and open up their shoulder, this ruins the power generation potential in a throw.

To do the trunk separation and rotation, you should be able to push off of your back leg simultaneously. The entire rotational motion is very hip-driven, and that should be the focus when trying to generate power in your throw.

People tend to focus on the motion of their arms only when trying to increase throwing power. While the motion of your arms is important, the rotation and knowing to shift your body weight correctly will help you enhance your throwing capabilities better.

Also, must-read: 3 Quarterback Drill To Do While Warming Up

Over the years, I’ve worked with several teams and athletes and the common mistake pitchers make is they go for exercises such as the bench press. This strengthens their internal rotation but slows down the external rotation of the arm affecting their throwing power.

As football players, it’s very common to do bench press. While it does provide you the necessary strength as footballers, it doesn’t bode well for pitchers in the game.

Bicep curls are also a very common exercise for football players. In these kinds of exercises, your shoulder is at rest and you don’t get the full range of motion necessary for a powerful throw. Unfortunately, not many people in the football community pay much attention to it as it’s not a popular thought in it.

I’ve worked with many football teams so I know what you guys are thinking. It’s not a bad thing to do these exercises, it’s just that you should know how a particular drill can have an impact on your throwing power.

During push-ups also, your shoulders are not strengthening to perform that external rotation of the arm to help you in your throw. I understand it’s not a common line of thought that I’m presenting here, but it’s what I can share with you from experience.

Must Read: How To Throw A Football In 6 Steps.

Also, learn how to avoid injury as there is a risk factor included in that.

As quarterbacks, I believe we are missing out on our maximum throw potential if we don’t work on these techniques i.e. having full external rotation in your throw. Guys like Bryce Young have a clear throwing release and a great external rotation.

These were a few takeaways if you were wondering how to increase throwing power. For more information on how to increase your speed or learn important techniques to help you perform better as a quarterback, visit our official website.

I hope you found this information valuable, if you have any thoughts on this, feel free to comment below!

Have a good day!