How to Throw a Football in 6 Steps

HomemobileHow to Throw a Football in 6 Steps 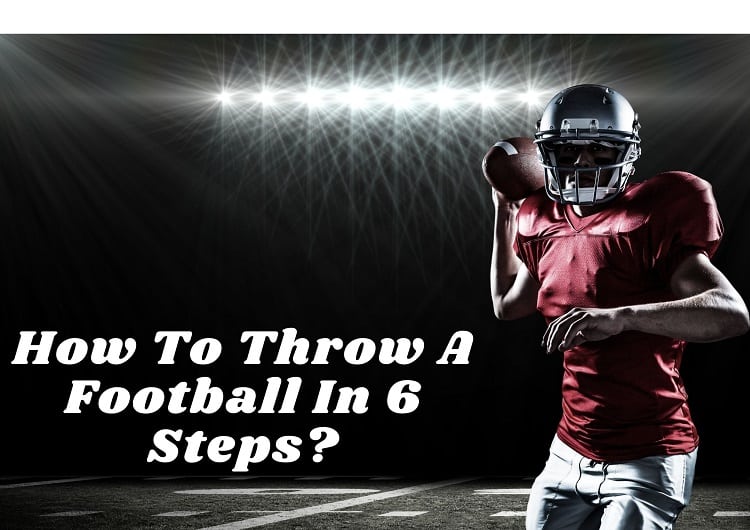 Have you ever observed people throw the football with extraordinary power and accuracy? How do they do it? If you’re wondering it’s a natural skill and only a few people can do it then you’re in for a surprise. In this article, I’ll explain how to throw a football in 6 steps.

If you are looking for a short answer, throwing a football in 6 steps involve getting your load down, creating a separation between the hips and shoulders, stepping with back foot push-off, elbow forward and wrist rotation, extending the elbow for the throw, and internally rotating the shoulder and flicking the wrist.

If you miss the bunch of mechanics I’m going to explain in this post, you’ll struggle with your throw. I’ve worked on these techniques for years and have developed them enough to teach you the skill. Whether you are a novice or a professional, this post has something for both.

For experienced professionals, it’s always good to have a quick recap of the fundamentals every once in a while to stay on top of their game.

In this article, I’ll try to compartmentalize the mechanics of throwing a football so you can understand. Let’s have a look at the 6 steps I follow to throw a football.

Step 1: Get Your Load Down

The very first step is to understand your load. You should know how to bring your ball back. That is the most important step because you need to make sure the direction of the load is correct.

Moreover, you need to make sure you are using the right muscles in getting your load down.

Getting your load down helps you generate the power in your throw and also provides a swift motion to the throw.

In the actual game, due to pressure, you might have to rush through his step. But you have to make sure you practice it enough before going onto the pitch.

Step 2: Create A Separation Between Hips And Shoulders

The next thing you have to work on is getting the separation or disassociation within your body. What this means is you have to try and get your hips to be going keeping your shoulders back.

Most people, especially newbies, focus too much on the steps rather than creating that disassociation between hips and shoulders.

Step 3: Step With Back Foot Push Off

Then you take a step forward and load your throw. You should get the rotation around your hips when you take the step and load the throw. During this process, you need to make sure you keep your shoulders back otherwise you will not be able to generate enough power in the throw.

The heel of your back foot should face vertically upwards during the push-off.

Now you need to step through pushing off your back leg. Keep your front should back and drive the elbow through. The most important step is to keep your shoulder locked in. In this step, make sure the football is over your head.

The football should be over your head in such a way that you should be able to extend your arm for launching your throw. This step also helps you create accuracy with your throw. If your arms extend straight ahead, your throw will be accurate.

On the other hand, if you don’t generate enough power and extend your elbow correctly, it would ruin the throw as the ball would either go too high or too low than the intended target.

Step 6: Internally Rotate The Shoulder And Flick The Wrist

Make sure you do the final step in the throw before releasing the ball. This follow-up step is very important as it helps you maintain the flow of the throw. Another thing to keep in mind at this point is to not mix the previous step with this one.

You have to ensure that after you extend your elbow, you are internally rotating the shoulder and flicking the wrist in the end. Also, you should not lose the position of your front arm in the process as it’s essential for accuracy and stability in your throw, it will also keep your spine healthy and not cause any injury.

If you enjoyed reading this, also check out: Top 10 Secrets To Improve Your Speed Immediately

I hope this information was useful to you and you understood the mechanics behind how to throw a football in 6 steps. It takes a while before you can master any skill, you just need to keep at it until you get better.

I’ve got programs for you that can help you with improving your overall speed and quarterback mechanics. If you are interested don’t forget to check out our official website for more information.

Have an awesome day!